WHEN YOU’RE READY TO COME

from SHE’S A BEAUTY (single)

The collaboration with the Rock group The Tubes resulted in some of David Foster’s most challenging work to date. Foster, who is mostly known to worldwide audiences as the King of Power Ballads and one of the key figures of the Adult Contemporary genre, has also successfully demonstrate his versatility into other music styles like R&B, Funk, Classical and Rock.

The first Rock step of his career was the 1978 critically acclaimed production of Alice Cooper’s “From The Inside.” Then, in the early Eighties, came the pairing with The Tubes.

Foster kept a respectful approach to The Tubes raw sound, but also added his polished pop sensibility to the arrangements and his trademark state of the art production. Both records, “The Completion Backward Principle” and “Outside/Inside,” were fantastic and presented radio friendly songs as well as more adventurous album tracks. With Foster’s guidance, The Tubes finally reached Billboard’s charts with top hits like “Talk To Ya Later” and “She’s A Beauty.” The latter is the pinnacle of The Tubes’ success, a top ten hit and evergreen on mainstream rock radio. That memorable single was released in 1983 and the b-side is an unreleased track from the “Outside/Inside” sessions entitled “When You’re Ready To Come.” It’s an up-tempo pop/rock number sung by Fee Waybill that mixes a new wave guitar-driven backing track with The Tubes’ lyrics,  synths and Steely Dan-like horns. “When You’re Ready To Come” was eventually included in “The Best Of The Tubes” that presents all their hits plus other b-sides and rarities. 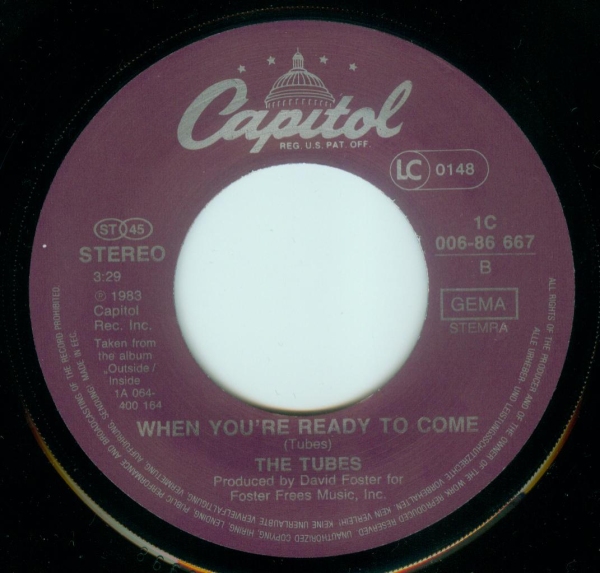