In 1988 David Foster produced the album “Citron” for Japanese superstar Seiko Matsuda. “Citron” was a hit in Japan and included several good pop songs plus a duet with Foster on the ballad “Every Little Hurt.”

In 1991 Sony Records released a compilation entitled “Romantique – Seiko Ballads” that presented Matsuda’s most loved  hits covered in English by an a-list of popular female singers. Among the songs appearing was a very good rendition of the ballad “Daite,” co-written by David Foster for the “Citron” album. The song was renamed “Hold Me” and beautifully performed by the trademark husky voice of Kim Carnes of “Bette Davis Eyes” fame. Another standout track, “Red Sweet Pea,” was rendered on “Romantique – Seiko Ballads” by the extraordinary voice of Patti Austin. The record also presents very good performances by Deniece Williams and  the late Nicolette Larson  plus lesser known but talented singers like Cattie Adams and Katrine Perkins. Because it relied heavily on keyboards, the overall production sound is a bit dated, but the good quality of the songwriting and the superior vocal performances make it worth a listen. 1991 also marked the production of “Daite” by veteran R&B vocal group The Stylistics on their “Sweet Memories” cd. 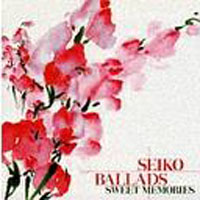