The late Ocie Lee Smith, better known as O.C. Smith, was an American pop/soul singer who brought several songs to the charts during the course of his career. Among those hits were “Daddy’s Little Man,” “Baby I Need Your Loving” and “Little Green Apples,” which reached #2 on both the R&B and Pop charts.In 1976, Smith found new success with “Together,” a hit on both sides of the ocean. “Together” was produced by Max Bennett and John Guerin and included  the rhythm section of the glorious L.A. Express. A sophisticated ballad clearly influenced by Bill Withers, Smith’s baritone was perfectly at home with the song’s sweet melody and its impeccable arrangement courtesy of Guerin.

The success of “Together” led Smith to record a whole album in 1977 with Bennett and Guerin for Caribou Records also entitled “Together.” Bennett and Guerin co-wrote part of the material included and picked some clever covers. The arrangements were extremely refined with rich strings and horns. The shades of jazz, soul and pop again followed the lines of Withers’ stuff, but were also influenced by Boz Scaggs’ hits of those days. The producers enlisted a number of talented colleagues like Victor Feldman, Mike Melvoin, Ernie Watts, Chuck Findley plus Jay Graydon and David Foster. The song selection included highlights like “Empty Hearts,” a bittersweet ballad written by Mike McDonald who also played keyboards on it, and “Come With Me,” a jazzy mid-tempo with soothing strings and great saxophone playing. Another standout moment is a cover of Johnny Bristol’s “You And I,” beautifully arranged and embellished by Foster’s trademark keyboards, tight horns and well-dosed backing vocals. Musically, it reminds us a lot of Foster’s work on Jaye P. Morgan’s 1976 self-titled album. Smith’s voice is at the top of its game throughout the album and the music production is killer. “Together” presents several other good songs and it makes for a pleasant listen for those who love the most sophisticated pop/soul of the seventies. 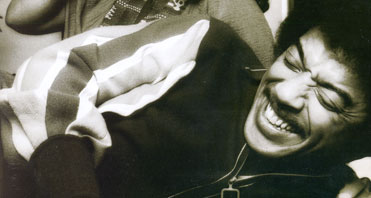 So let’s give our love a chance
Together, we can make it grow
Build love’s eternal fire
So the whole wide world will know
We’re proud of this love affair
We need each other, baby
That helps to make the pact
But it hurts me to my heart
To see us so far apart

Oh, we’re doing ourselves an injustice
And I don’t think that’s fair
Cause the kind of love we got
Oh, it’s truly rare

Oh, you and I, you and I
Sounds like you and I
One good love affair, oh, yeah
We owe it to each other, baby
And it brings me to bitter tears
Everytime I think about
All those wasted years