from THE TWO OF US

Pianist Ramsey Lewis and singer Nancy Wilson are two legends of the soul/jazz world. As a duo they have released three albums; “The Two Of Us” in 1984, “Meant To Be” in 2002 and “Simple Pleasures” in 2003.

Their first collaboration, “The Two Of Us,” is produced by bass virtuoso Stanley Clarke. It is a pleasure to listen to Wilson’s unique voice backed up by Lewis’ brilliant work on the acoustic piano though the programmed drums and heavy use of synthesizers sound a bit dated and cheesy, especially on the funk/jazz instrumentals. On the other hand, the selection of songs presents a few smart choices like the ballad “Midnight Rendezvous,” originally on David Roberts’ wonderful and little-known masterpiece “All Dressed Up,” the intense title track co-written by Jeremy Lubbock and Vassal Benford, plus the elegant “Never Wanna Say Goodnight.” Another highlight is “Slippin’ Away,” a mid-tempo R&B number co-written by David Foster, David Paich of Toto fame and the soul great Leon Ware who recorded it on his 1982 self-titled masterpiece. On this tune and throughout the whole record, Wilson shines vocally while being well supported by Lewis and many top class musicians and singers. 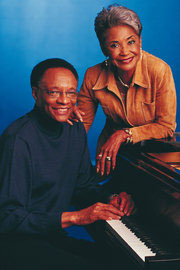