Simone Bittencourt de Oliveira is a famous Brazilian pop singer known simply as Simone. Simone is one of the most musically refined and elegant personalities in hercountry’s popular music.

From the early Seventies to this day she has released a multitude of albums giving her smooth, jazzy treatment to the best work of legendary songwriters like Caetano Veloso, Djavan, Ivan Lins and Chico Buarque. Simone’s extremely pleasing singing was often matched by a music background that was open to the best pop influences coming from North America. In 1982 she released “Corpo E Alma,” an album that sold over 700,000 copies to become one of her best sellers. “Corpo E Alma” was produced by Mazola, one of Brazil’s leading music producers, and was partially recorded in Los Angeles with Humberto Gatica in the control room and a fantastic line-up of session men that included Harvey Mason on drums, Nathan East on bass, Lee Ritenour on guitar and David Foster on keyboards. Erich Bulling arranged the material with Jerry Hey taking care of the horn parts.

Musically, “Corpo E Alma” is a mix of classic Brazilian pop with strong funky/soul influences. Foster played his trademark piano and/or rhodes on three songs. “Merecimento” is an elegant, lush ballad while “Louvacao A Mariana,” co-written by the legendary Milton Nascimento, is an up-tempo number with tight horns and percussions that echoes Flora Purim’s fusion works of that era. The third song, “To Que To,” is an Earth, Wind & Fire-influenced funky/soul jam with strings, horns and Ritenour’s delicious guitar licks. “To Que To” was also used as the opening theme of the famous Brazilian soap opera “Sol De Verao.” 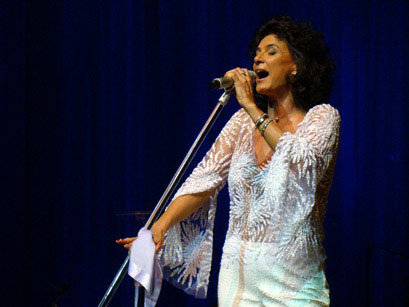