Andrea Bocelli’s “My Christmas” is going to be the most successful holiday-themed album of 2009 and one of the year’s best sellers. Again, the partnership with David Foster has brought the Italian tenor massive worldwide aclaim.
In 2007, Foster was already in the spotlight with his production of Josh Groban’s “Noel” that was certified quintuple platinum in the U.S. and has become one of the most successful Christmas releases ever. “My Christmas” is clearly following its footsteps with the perfect mix of Bocelli’s unique voice enhanced by Foster’s state of the art production and superior arrangements. The album presents a varied collection of holiday songs that let the Italian superstar shine from tender, intimate moments to full operatic pieces. There are Christmas pop classics like “White Christmas,” “Santa Claus Is Coming To Town” and “What Child Is This,” a duet with R&B megastar Mary J. Blige. Part of the album is made of more religious songs like the gorgeous “Lord’s Prayer” with the majestic Mormon Tabernacle Choir, “Ave Maria” and “Adeste Fideles.” There’s really something for everyone on “My Christmas.” Other duet special guests on “My Christmas” are the fantastic Natalie Cole with an elegant rendition of “The Christmas Song,” newcomer Katherine Jenkins on the meaningful ballad, “I Believe” and Country superstar Reba McEntire on “Blue Christmas.” One true showstopper is the hilarious duet with the Muppets on “Jingle Bells.”

David Foster has often declared that Andrea Bocelli is the best singer in world and “My Christmas” proves again that statement is quite true. 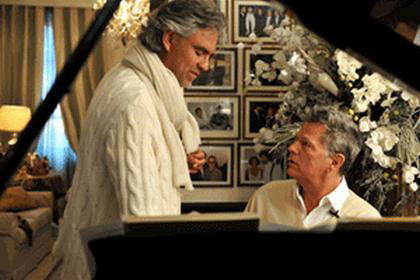 Chestnuts roasting on an open fire,
Jack Frost nipping on your nose,
Yuletide carols being sung by a choir,
And folks dressed up like Eskimos.

Everybody knows a turkey and some mistletoe,
Help to make the season bright.
Tiny tots with their eyes all aglow,
Will find it hard to sleep tonight.

They know that Santa’s on his way;
He’s loaded lots of toys and goodies on his sleigh.
And every mother’s child is going to spy,
To see if reindeer really know how to fly.

And so I’m offering this simple phrase,
To kids from one to ninety-two,
Although its been said many times, many ways,
A very Merry Christmas to you