From THE BOY FROM OZ
Written by David Foster, Peter Allen & Tom Keane

In the fall of 2003 after being an enormous hit in its homeland, “The Boy From Oz” became the first Australian musical to reach Broadway. This show tells the life story of the late Peter Allen who came from down under in the late sixties to achieve fame and big success in New York.

Allen was a fantastic performer who triumphed on Broadway with many concert appearances at Radio City Music Hall and even had his own show, “Legs Diamond,” in the late eighties. Allen was, first and foremost, a wonderful singer/songwriter/performer who co-wrote many unforgettable gems. A huge part of his songbook was incorporated in “The Boy From Oz.” It includes evergreens like “I’d Rather Leave While I’m In Love,” “I Honestly Love You” and “Everything Old Is New Again” that have been sung by a who’s who of singers worldwide. Hugh Jackman played the lead role in the Broadway edition of the musical and he did an outstanding job, eventually winning a Tony Award for his performance. “The Boy From Oz” was also nominated as Best Musical and scored several other theatre related awards.

Allen first collaborated with David Foster in 1980 when the Canadian music maker produced Allen’s most successful album, “Bi Coastal.” The title track from that magnificent record, co-written by Allen with Foster and Tom Keane, was also included in the “Boy From Oz.” Although tunefully tailored in the best Broadway tradition for the musical with a good vocal performance by Jackman, the new rendition lacks Foster’s superior artistry in the arrangement and production, the smooth elegance of the sound and Allen’s very personal voice. All things considered, it is still nice to witness a giant of the pop music world like Peter Allen being honored and remembered with a hit Broadway show like “The Boy From Oz.” The soundtrack, produced by the legendary Phil Ramone, makes for a very pleasant listen. However, we strongly suggest our readers hunt for Allen’s original recordings to fully appreciate the magic of his talent. 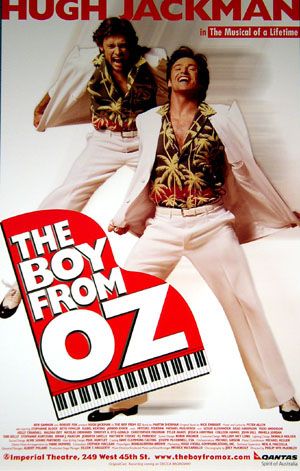 You used to live in New York City
Then you moved to L.A.
But you still miss the streets
Where you used to play

Bi-coastal, when both are so much fun
Why do you have to pick one