From PEGASUS
Written by Jack Conrad

In the fall of 1974, after the good success of his first disco project, “The Bottom Line,” producer Jack Conrad went back into the studio to record two more albums in the same vein. “The Bottom Line” got positive reviews and spawned a single, “That’s The Way To Go” that made some buzz on the dancefloors.

Subsequently, for the new recordings, Conrad reunited with the same spectacular musicians who played on “The Bottom Line” among them David Foster on keyboards, Jay Graydon on guitars and Chuck Findley on trumpet and flugelhorn. Given the amount of talent in the studio it makes no surprise that the new release entitled “Pegasus” was as smooth as silk and featured  top notch musical performances. For this reason, “Pegasus” is a wonderful chance for fans to listen to his fantastic keyboard playing and enjoy Graydon’s great guitar. “Fly” was the opening track and the single off the album. It follows the footsteps of “That’s The Way To Go” though it wasn’t as successful commercially.
Among the other songs we’d like to mention the soft beats of “Touch The One You Love” with beautiful horns punctuations, Graydon’s raw “Shake That Funky Thing” and “Let Me Love You” with Foster’s great work on Hammond organ.
In 1998 both “The Bottom Line” and “Pegasus” were released on cd in Japan and the welcome event was enhanced by the presence of bonus material from those old sessions that resulted in the never released “Makin’ Tracks” album. Of those songs “Midnight Flyer” is a very good mix of dance beats and jazz/fusion playing while “Ride” has strong echoes of quality pop. We’re talking about disco influenced stuff but we can assure that disco music rarely sounded as classy and elegant as on these recordings. 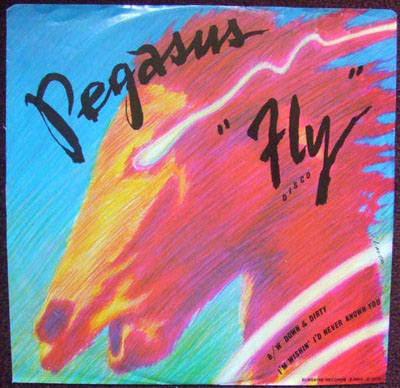