WHEN I FALL IN LOVE

From SLEEPLESS IN SEATTLE
Written by Victor Young & Edward Heyman

“When I Fall In Love,” co-written by Victor Young and Edward Heyman, is one the true standards in the history of popular music. Through the years this timeless ballad has been remade countless times by the most important names in music.

One of the most celebrated versions was cut in 1993 by Céliné Dion and UK blue-eyed singer Clive Griffin for the soundtrack of the blockbuster romantic comedy “Sleepless In Seattle.” Produced by David Foster, “When I Fall In Love” became a hit single reaching #6 on the adult contemporary chart and #23 on Billboard’s Hot 100.

Foster cleverly reworked the song giving it a modern twist with a smart use of keyboards yet kept a traditional flair thanks to Jeremy Lubbock’s orchestral touch. Both singers gave classy, effective performances with their voices melding beautifully under Foster’s expert guidance. The final result brought a Grammy nod for Best Pop Vocal Performance By A Group or Duo while Foster and Lubbock won
the trophy for their outstanding arrangement. The soundtrack for “Sleepless In Seattle” went to #1 and sold over four million copies in the U.S. alone. Other than the Celine Dion/Clive Griffin hit duet, the album included previously released romantic material by the likes of Jimmy Durante, Carly Simon, Tammy Wynette, Nat King Cole and Louis Armstrong. “When I Fall In Love” was also released on Dion’s top-selling “The Color Of My Love” and Griffin’s quite good self-titled record.

The demo of the song was originally recorded by Dion with the late, unforgettable Warren Wiebe who was Foster’s “voice” in the nineties. In 1996, Foster produced
another cover of “When I Fall In Love” for Natalie Cole’s “Stardust” and again won a Grammy for “Best Instrumental Arrangement Accompanying Vocalist(s). 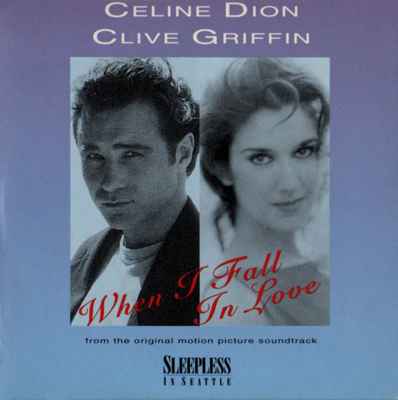