THE MINUTE I SAW YOU

“Three Men and a Baby” was the biggest box office success of 1987. Directed by Leonard Nimoy and starring Tom Selleck, Ted Danson and Steve Guttenberg, this romantic comedy grossed almost $168 million in the U.S. alone. Although the orchestral score was composed by the legendary Marvin Hamlisch, the soundtrack included several pop songs of the era. Among these were Peter Cetera’s tender “Daddy’s Girl” from his record “Solitude Solitaire,” Simply Red’s hit “The Right Thing” and Miami Sound Machine’s “Conga.” A couple of new songs were Gloria Estefan’s “Bad Boy” and John Parr’s “The Minute I Saw You.”

Known for his mega hit “St. Elmo’s Fire,” Parr’s “The Minute I Saw You.” was a great, up-tempo tune co-written by the singer with Hamlisch, Carole Bayer Sager and David Foster who, like with “St. Elmo’s Fire”, produced and arranged the track. The song is catchy with an energetic vibe and sports a strong performance by the singer underlined by Foster’s state of the art keyboard work. The only questionable thing about the whole project is that neither Parr’s song nor the “Three Man and a Baby” soundtrack were released on the music market. It’s a pity because both the soundtrack and “The Minute I Saw You” could have been hits given the huge success of the movie and the quality of the track. 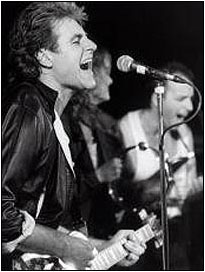