From MY GUY/BEAUTIFUL YOU (single)
Written by Smokey Robinson

In 1975, a talented new keyboard player from Canada named David Foster was building up a solid reputation as red hot session guy on the Los Angeles music scene. That year he played on a long string of albums for big names like George Harrison, Johnny Cash and Bobby Womack, rock stars like Keith Moon and Tommy Bolin plus southern rockers Lynyrd Skynyrd. He also appeared on a successful album by Neil Sedaka, “The Hungry Years,” that gave him one of his first big hits as a session man with the #1 song “Bad Blood.”
Sedaka must have been impressed by the multifaceted talent of this young player. A few years later, when he was planning the debut single for his daughter Dara, he called Foster to co-produce it. Released in 1978, “My Guy” is a sunny, laid back cover of the Mary Wells R&B hit written by Smokey Robinson. Foster’s arrangement gives the song a flavored pop appeal that suits Dara Sedaka’s teenager voice. The impeccable backing track was performed by the cream of the L.A. players including the original Toto rhythm section of Jeff Porcaro and David Hungate, Jay Graydon and Ray Parker on guitars plus the unique touch of Foster on keys and the strings and horns arrangements. Dara Sedaka did a good job with her lead vocal supported by the soulful backing voice of Bill Champlin.
The b-side of the single, “Beautiful You,” was co-written by Neil Sedaka with frequent collaborator Philip Cody. The famous singer already recorded it for his 1972 album “Solitaire.” “Beautiful You” was also produced by Foster with Sedaka. It has the vintage sound that made songs like “Oh Carol” worldwide classics.
The musical relationship between Foster and the Sedaka family had another chapter in 1982 when Foster produced Dara Sedaka’s debut album entitled “I’m Your Girlfriend.” We have previously mentioned that record on these pages as an example of quality pop that remained a well-kept secret for too many years. We highly recommend it to all Foster fans. It can easily be found on the net. Check it out! 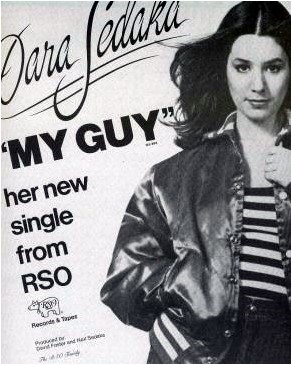 I’m sticking to my guy like a stamp to a letter
Like birds of a feather, we stick together
I’m tellin’ you from the start
I can’t be torn apart from my guy

He may not be a movie star
But when it comes to bein’ happy, we are
There’s not a man today
Who could take me away from my guy

He may not be a movie star
But when it comes to bein’ happy, we are
There’s not a man today
Who could take me away from my guy