I’VE GOT A CRUSH ON YOU

Released in 1993, “Duets” was Frank Sinatra’s last huge comeback album. With this record, “The Voice” reached #2 on the charts and sold more than three millions copies. “Duets” included collaborations with many mega-stars including Aretha Franklin, Bono, Tony Bennett and Liza Minnelli. The project was overseen by super-producer Phil Ramone who called a few of his more famous and talented colleagues to work with him on some of the songs. One call was to David Foster who co-produced “I’ve Got A Crush On You,” a beautiful collaboration with Barbra Streisand. When he was asked to participate on this special project, Foster was already working with Streisand on the “Back To Broadway” album. Ironically, they recorded a stunning rendition of the famous Gershwin evergreen, but didn’t include it on her album. The arrangement by Patrick Williams is perfect in its elegance while the production is pristine and hi-tech. Although Streisand recorded her portion of the duet in L.A., the fact they didn’t record the song together didn’t affect the final result. Those two timeless voices trade lines in a stunning, silky musical scenario that’s enhanced by lush strings and Michael Melvoin’s delicate piano. “I’ve Got A Crush On You” was later included on Streisand’s own 2002 “Duets” cd.
Sinatra’s vocal performances on the thirteen songs of “Duets” are a perfect example of class and style. There are many great moments on the album that deserve a special mention like the laid back duet with Bono on “I’ve Got You Under My Skin” and the swinging rendition of “The Lady Is A Tramp” with the late Luther Vandross. 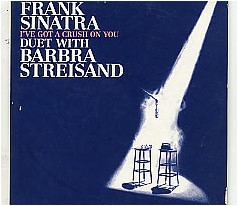 How glad the many millions of Annabelles and Lillians
Would be to capture me
But you had such persistence, you wore down my resistance
I fell and it was swell

I’m your big and brave and handsome romeo
How I won you I shall never never know
It’s not that youre attractive
But, oh, my heart grew active
When you came into view

Ive got a crush on you, sweetie pie
All the day and night-time give me sigh
I never had the least notion that
I could fall with so much emotion

Could you coo, could you care
For a cunning cottage we could share
The world will pardon my mush
Cause I have got a crush on you

Could you coo, could you care
For a cunning cottage
That we could share
The world will pardon my mush
Cause I have got a crush, my baby, on you