THE GIRL IS MINE

From THRILLER
Written by Michael Jackson

At the initial stage of his career, David Foster was a fixture on all the most important records produced by the legendary Quincy Jones. Whether it was utilizing his arranging skills, tasteful playing of several instruments or songwriting genius, Jones always knew he could count on Foster’s unique talent to enhance and inspire. On the other hand, the up and coming musician knew that Quincy Jones’ was the best mentor to help him accomplish his goal to become a successful music maker. Foster appeared on Q’s big sellers like George Benson’s “Give Me The Night” and Michael Jackson’s “Off The Wall.” Jackson’s mega-successful 1982 album, “Thriller,” saw Foster once again adding his touch to the project. “The Girl Is Mine,” a pop duet with Paul McCartney, was the first smash hit from “Thriller,” reaching the top of several charts. Jones conceived this sweet, up-tempo ballad with his best alumni; David Paich, Jerry Hey and Foster who handled the clever synthesizer arrangement. Foster’s colorful synth together with Paich’s piano and Greg Phillinganes’ rhodes provides a delicate carpet for the two superstars. “The Girl Is Mine” is a perfect example of the most sophisticated pop music of the early eighties, superbly crafted and performed with class by great musicians and two extraordinary singers. “Thriller” went on to become the best selling album of all time, with more than 60 million copies worldwide. It also gave us giant chart hits like “Billy Jean,” “Beat It” and “Human Nature,” plus winning several Grammy’s. It was, without a doubt, the peak of both Jackson’s and Jones’ careers. 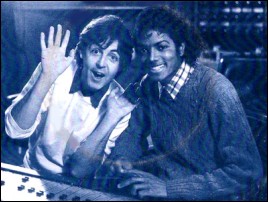 [Bridge (Paul)]
I Love You More Than He
(Take You Anywhere)

[Michael]
But I Love You Endlessly
(Loving We Will Share)

[Michael & Paul]
So Come And Go With Me
To One Town

[Paul]
Michael, We’re Not Going To Fight About This, Okay

[Michael]
Paul, I Think I Told You, I’m A Lover Not A Fighter

[Paul]
I’ve Heard It All Before, Michael
She Told Me That I’m Her Forever Lover, You Know, Don’t You Remember

[Michael]
Well, After Loving Me, She Said She Couldn’t Love Another

[Paul]
Is That What She Said

[Michael]
Yes, She Said It, You Keep Dreaming

[Paul]
I Don’t Believe It