A LOVE THAT WILL LAST

Renee Olstead is an incredibly gifted teen singer/actress who started in show business at a very young age. She starred with immediate success in the television series “Still Standing,” acted in a couple of movies, and released an obscure, country-oriented album. David Foster, fresh from the very successful discovery of Michael Bublé, took Olstead under his wing and signed her to his 143 Records label. Foster saw in Olstead the perfect female counterpart to Bublé, both extremely talented and attractive. They went into the studio in the fall of 2003 when the singer was just 14 to work on her album. The self-titled album saw the light of day in June 2004 and quickly attracted listeners around the world with the perfect mix of pop and jazz standards caressed by the young singer’s beautiful voice. Foster produced the album with peerless elegance, calling in the best arrangers like Jeremy Lubbock, John Clayton, Sammy Nestico and Billy Childs, to give new sparkle to timeless material like “Someone To Watch Over Me,” “What A Difference A Day Makes,” and “Sunday Kind Of Love.” The Canadian super producer added his golden touch to the Grammy nominated arrangement on “Summertime.” Foster also crafted a lovely cover of Neil Sedaka’s “Breaking Up Is Hard To Do,” a duet with young sensation Peter Cincotti. The ballad, “A Love That Will Last,” is a wonderful Foster original co-written with Linda Thompson. This song echoes Nora Jones’ style, but reaches higher levels in its structure consisting of clever key changes plus hi-tech musical and vocal performances. Foster also offers a delicate piano solo in the middle of the tune. For those who love Foster’s pop work from the beginning of his career, check out the fender rhodes driven cover of Maria Maldaur’s “Midnight At The Oasis.” Throughout the album Renee Olstead is stunning for phrasing and style. The self-titled album reached #1 on Billboard’s jazz chart and paved the way for her performances at the most important jazz festivals around the world. These days, Olstead and Foster are completing the follow-up record, “Skylark,” which should be out in just a few months. 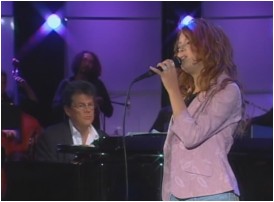