From TIME AND CHANCE
Written by Douglas Edwards & David Richardson

Color Me Badd started with a bang with their 1991 debut album “C.M.B.” It sold over 3 million copies and spawned a bunch of huge chart hits like “I Wanna Sex You Up” and “I Adore Mi Amor.” This talented vocal quartet released their sophomore album, “Time And Chance,” in the fall of 1993. For the new project the group collaborated with top producers like David Foster, Jimmy Jam and Terry Levis. The sounds of “Time And Chance” are quite refined and moved towards the classier pop/r&b zones with smooth grooves and sophisticated moods.
Foster produced and arranged three tracks for “Time And Chance.” “Close To Heaven,” written by Color Me Badd, is an acoustic ditty with a delicious Latin vibe. The group’s sweet vocal harmonies are in the spotlight here together with some beautiful acoustic guitar licks by Michael Thompson. “Let’s Start With Forever” is a Diane Warren ballad Foster arranged with his usual class. The last song Foster provided for the album is an enchanting remake of Skylark’s “Wildflower.” He took his old band’s hit single and reinvented it. The producer’s acoustic piano and effective orchestral arrangement underline the singer’s understated but effective performance. Michael Thompson once again plays his magical guitar as a counterpart to the group’s perfect vocal performances.
In 1994 Color Me Badd went to Japan with Foster as part of his “J.T. Superproducers” tour that included Celine Dion, Peabo Bryson, Warren Wiebe and Jay Graydon in the line-up. On that occasion the group recorded “Love Lights The World” with Dion and Bryson, which was co-written, arranged and produced by Foster. 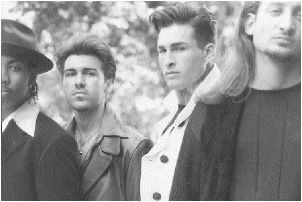 still rings in midnight silence,
in her ears
Let her cry, for she’s a lady
let her dream, for she’s a child
let the rain fall down upon her
She’s a free and gentle flower,
growing wild

and if by chance I should hold her
let me hold her for a time
but if allowed just one possession
I would pick her from the garden,
to be mine

Be careful how you touch her,
for she’ll awaken
and sleep’s the only freedom that she knows
and when you walk into her eyes,
you won’t believe
the way she’s always paying
for a debt she never owes
and a silent wind still blows
that only she can hear and so she goes

let the rain fall down upon her
She’s a free and gentle flower,
growing wild