“Raise” was another winner in the long, successful career of Earth Wind & Fire. Released in 1981, it reached the top of the black chart and was a top five pop entry. This album is rich with great songs like the opener, “Let’s Groove,” a dance anthem that was a big hit all over the world. There are also the sultry ballads including “My Love,” superbly sung by Maurice White, and the ultra smooth “Wanna Be With You,” which brought the band another Grammy for “Best R&B Performance By A Duo Or Group With Vocals.” Philip Bailey is in the spotlight on the up-tempo “I’ve Had Enough” that he co-wrote with studio legend Greg Phillinganes. Another track dominated by Bailey’s pyrotechnic vocals is “Evolution Orange.” It is a great dance groove co-written by Maurice White, David Foster and Nan O’Byrne. The song is another example of the magic that these gentlemen always create together in the studio. It is beautifully arranged with great rhythm changes. Power is found in the inspired string and horn arrangements courtesy of Jerry Hey and Foster who also handles his trademark keyboards and synthesizer bass. Bailey truly touches the sky with his falsetto and the typical vocal harmonies of the band really shine on this one.
“Raise” quickly became a platinum seller and it kept the momentum going for Earth Wind & Fire who had top billing in those years. On a final note, Foster and Earth Wind & Fire have recently been in the studio to work on a new song titled “Gather ‘Round.” The final result will be released during the upcoming Christmas season. 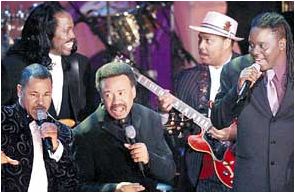 Patience
The healer and the giver

Patience will deliver
Fire from the spark