David Foster’s collaboration with The Average White Band didn’t achieve chart action in the USA, but was quite successful in the UK. In terms of artistic values, it stands as one of his best productions ever. Released in the summer of 1980, “Shine” is a delicious pop/soul album that mixed the Scottish band’s original, gritty funk with Foster’s smooth, polished and perfectly arranged sounds. AWB was switching labels when they started working with Foster. When they signed with Arista they lost four brand new recordings to Atlantic who used them to enrich a greatest hits album, “Volume VIII,” that was released at the end of 1980. “Growing Pains” is one of those tunes. It is a magnificent ballad co-written by Foster with Alan Gorrie and Hamish Stuart of AWB. From its elegant sax intro, the song develops into an incredibly refined and classy jam. It includes some delicious vocal harmonies sung by Stuart and Gorrie, incorporates Foster’s glorious keyboards, and is surrounded by strings and horns to die for. Everything is perfect. The Canadian producer here definitely gives another proof of his timeless musical art.
“Volume VIII” includes three other compositions produced by Foster. The opener, “Kiss Me,” is a good funk/rock number that shows a bit of influence from the new wave sounds of those days. “Love Won’t Get In The Way” is closer to AWB’s origins, a funky number with prominent horns and an infectious rhythm. The last one, “Love Gives, Love Takes Away,” was written by Gorrie and is clearly influenced by the Doobie Brothers’ “Minute By Minute.” It is another great song and greatly benefits from Foster’s clever arrangement and production. 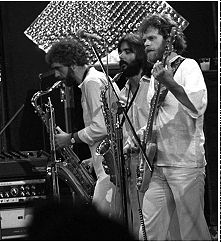