Kenny Loggins and David Foster have worked together several times in the course of their long and successful careers. In the archives area of this website you can already find a couple of their best efforts. This week we have picked another beautiful composition co-written by them. “Daddy’s Back” is taken from Loggins’ solo debut album, “Celebrate Me Home.” Released in 1977 right after the singer ended his successful partnership with Jim Messina that first brought Loggins in the spotlight, “Celebrate Me Home” is a fine collection of brilliant and sophisticated pop songs produced by Phil Ramone (Paul Simon and Billy Joel) and fusion master Bob James who clearly influenced the album’s sound architecture with his jazz flavors.
Kenny Loggins’ tenor voice steals the show here with its mellow tones and crystal clear high notes on songs like “I Believe In Love,” “Set It Free,” and the famous, inspirational title track. “Daddy’s Back” is another winning moment. It is a pretty, smooth song that starts in a slow tempo with the singer only surrounded by acoustic guitars, electric piano and percussion. It then gently builds to a rich, orchestral up-tempo ending. The producers assembled a stunning line-up to play on the record, calling several session aces; drummers Harvey Mason and Steve Gadd, guitarists Lee Ritenour, Robben Ford, Dean Parks and Eric Gale. Bob James played all the keyboards together with Richard Tee. “Celebrate Me Home” reached Billboard’s top 30 and was a platinum seller. It started a string of hit records for Loggins that would bring him superstar status in just a few years. 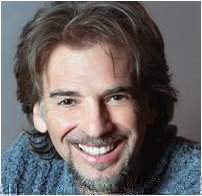