From SHINE
Written by Alan Gorrie

Let’s take another break from David Foster’s amazing string of ballads and take a listen to this energetic r&b/disco groove from Average White Band’s Shine album that he produced in 1980. Average White Band is the funkiest band ever to come out of Europe, six guys from Scotland that had tremendous success in the seventies with classics like “Pick Up The Pieces” and “Cut The Cake”. When Foster was called to produce this record, he sure added his own touch to their typical style and you can hear the results on soft ballads like “For You, For Love”, “If Love Only Lasts For One Night” and great uptempo numbers like “Help Is On The Way” and “Our Time Has Come”.

“Let’s Go Round Again” was a big hit in Europe that year, while it scored less well in the USA. It remains a dancefloor classic still today and one of the biggest hits of AWB’s career. Foster and AWB did another collaboration (actually from the same recording sessions) with four tracks that can be found on the “Volume VIII” album that came out that same year for their old company. Those songs formed the A side of the record, while the B side included some of their biggest singles. Look for that record cause it includes another wonderful Foster classic, a ballad entitled “Growing Pains”. 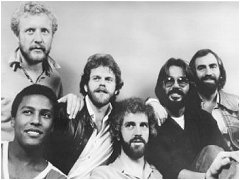 Time, that changes almost everything
Can sometimes let us see the better side
Of the feelings we once shared

Now, baby I know
That you think I will be different now
Inside of me nothing has changed
So I’m asking you again
Please
There’s no one else that could have brought me
Back
And no-one that ever could set me free
From the memory I kept within my heart