From FROM THE INSIDE
Written by Alice Cooper, Dick Wagner, Bernie Taupin & David Foster

It is a rock song full of heavy guitars (Dick Wagner, Steve Lukather, Jay Graydon…) and with a strong vocal performance by Cooper, but being a Foster production, it is also classy and perfectly arranged like other of his more rock oriented productions like “Stranded” or “Sweet Body” on “Airplay”, or the whole second side of Hall & Oates’ “Along The Red Ledge” (which was released the same year).The Foster fans will find typical signs of his presence like the piano intro, the complex and refined backing vocals arrangements sung by the great Bill Champlin, a nice touch of strings and the overall clean sound of the production.

Alice Cooper said recently that “the combination of Cooper/Taupin and David Foster resulted in what I consider my classiest-sounding album” and you can definitely hear it in the title track. Foster wrote it in 1978, that year he also wrote timeless ballads like “After The Love Is Gone” and “We Both Tried”, R&B anthems like “Got To Be Real” and “In The Stone” and uptempo pop tunes like “It’s The Falling In Love”, rock, soul, pop, r&b…..talking about versatility ! 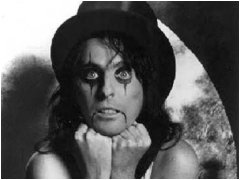