THE FOOL IS ALL ALONE

From RUNAWAY
Written by David Foster and Bill Champlin

We need to say a few words to introduce this artist, Bill Champlin is a true legend, he has been the leader of the San Francisco band The Sons Of Champlin which released half a dozen critically acclaimed records from 1969 to 1977 then the group disbanded and Champlin went to Los Angeles where he started working as a studio singer and songwriter. He and Foster worked together on dozens of projects, the most famous one is the Earth, Wind & Fire hit and Grammy winner “After The Love Is Gone” that they cowrote with Jay Graydon. These three gentleman have made some of finest pop music ever, writing and producing many hit records and also some hidden treasure like this album that came out in 1982 and that is an absolute favorite among Foster’s fans.

Runaway is the second record that Foster produced for Champlin (the first one was “Single” in 1978) and their collaboration went on when Champlin joined Chicago under Foster production. This album is really close for sounds and production style to Chicago 16 which came out that same year, and it yelded two minor hits on the Billboard charts “Sara” and “Tonight Tonight”. “The Fool Is All Alone” is a magical ballad about lost love, Champlin sings with passion and taste (we’re talking about one of the best singers ever) and you can hear the wonderful Foster touch at the piano and fender Rhodes and check out the guitar solo courtesy of Mr.. Jay Graydon. Today Champlin is still with Chicago (he sang lead vocals on their hits “Hard Habit To Break” and “Look Away”) and he is also working again with the Sons so when you see his name on a CD cover just buy it cause it’s a warranty of quality and good music. 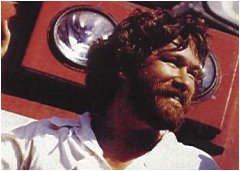 While I was searchin’ for a thrill
you went away, now I’m feelin’ stranded
took you for granted for too long