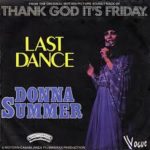 “Last Dance” was one of those disco/pop staples that the late, great Donna Summer (1948-2012) brought to the top of the charts worldwide in the second half of the seventies. This evergreen was penned by the late singer/songwriter Paul Jabara (1948-1992). “Last Dance” was included on the soundtrack of the 1978 disco movie, Thank God It’s Friday. Starring alongside Ms. Summer were talented newcomers including Jeff Goldblum and Debra Winger plus The Commodores, the famous soul/r&b group.