from ROCK AND ROLL MUSIC FROM THE PLANET EART

Joseph Allen McDonald better known as Country Joe McDonald is a famous rock musician who was the lead singer of the San Francisco band, Country Joe And The Fish. This rock group was part of the psychedelic wave in the sixties and participated to legendary music festivals like Woodstock and Monterey.

Country Joe And The Fish also became a fixture on venues like The Fillmore with their anti-war anthems like “I Feel Like I’m Fixin’ To Die Rag,” written by McDonald. In 1971 the group disbanded and McDonald started a solo career releasing several albums throughout the seventies. 1978 saw the release of “Rock And Roll Music From The Planet Earth,” a solid rock album that showcases McDonald’s typical social themes mixed with the slick arrangements and performances of the LA mafia of the late seventies. Produced by Trevor Lawrence, “Rock And Roll Music From The Planet Earth” presents young talents like David Foster, Jay Graydon, Jeff Porcaro and his brother Mike infusing energy and class to good up-tempos like “Southern Cross” and “Bring Back The 60s, Man.” The rocking opener, “Coyote” is probably the best moment on the album together with the country/rock sounds of “Sunshine At My Window.”
McDonald’s vocal performance has echoes of Neil Young’s style while Foster’s acoustic and electric piano can be heard on four tracks including the aforementioned “Coyote” and another energetic number entitled “Rock And Roll Again.” There’s another socially meaningful song entitled “Power Plant Blues” with Foster on piano that was included on the singer’s 1983 album “Child’s Play.” It was probably recorded at the same “Rock And Roll Music From The Planet Earth” sessions given that the line-up is basically the same with the Porcaro brothers plus Graydon and John Blakeley on guitars. 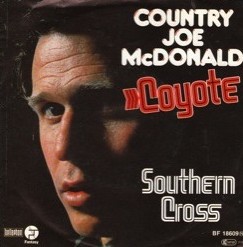