“The Best Of Me” is without any doubt one of David Foster’s lovelier compositions ever. This sweet ballad, co-written with famed arranger, Jeremy Lubbock and superstar singer/songwriter Richard Marx, was initially recorded a couple times by Foster for his solo releases. The second version, sung as a duet with Olivia Newton-John, made the Billboard charts in 1986 and was also a top adult contemporary hit.

The charm of “The Best Of Me” became evident to the eyes of amazing singers like Kenny Rogers, Phil Perry and Barry Manilow who covered this song always with fine results. Manilow’s version was produced by Foster in 1992 for a special box set release. Another interesting cover of “The Best Of Me” was recorded in 1989 by UK superstar, Cliff Richard. Richard’s version of “The Best Of Me,” given its important chart action, can easily be considered the most successful ever. The song was included on the veteran singer’s top ten album “Stronger” and its release, marketed as Richard’s 100th single, reached #2 on the UK charts. Richard’s vocal performance is flawless and captures perfectly the lyrics’ spirit supported by some minimal keyboard accompaniment and an intense guitar solo. Through The years the beauty of “The Best Of Me” has attracted many more singers and just recently Michael Buble sung it under Foster’s production for his “Crazy Love: Hollywood Edition” album. Another precious take of this song is the one by its co-writer, Richard Marx that can be found on the European edition of his 2010 album, “Stories To Tell.” 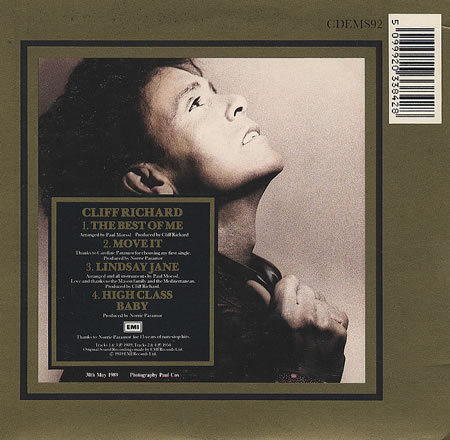 For you
I saved the best of me