LOVIN’ AND LOSIN’ YOU

The late Jeffrey Porcaro was the heart and soul of the legendary rock group, Toto and also one of the most important drummers in the history of rock music. Together with his father Joe and younger brothers Steve and Michael, Jeff Porcaro was part of one of the most respected legacies in the music world.

It took less than a second to a trained ear to know it was Porcaro playing on that particular track and his performances, both live or in the studio, were always impeccable and spectacular. Jeff died way too soon, in 1992, at age thirty-eight and left a big void in the international music scene. During the course of his amazing career, Porcaro played dozen of gigs with David Foster while they were doing session work in the seventies. Some of that amazing stuff and many more treasures can be found on a precious compilation album released in 2008 and entitled “Jeff Porcaro Session Works.” That endeavor includes seventeen gems from Porcaro’s unique career. The opener and the closer, “Moodido” and Home Of The Brave,” come directly from Toto’s songbook.  A few fundamental things are missing like Porcaro’s seminal work with Steely Dan but huge hits like Bruce Springsteen’s “Human Touch,” Michael Bolton’s “When A Man Loves A Woman,” Boz Scaggs’ “Lowdown,” Michael Jackson’s “Human Nature” and Toto’s anthem, “Africa” are all included here. “Jeff Porcaro Session Works” also presents great album tracks by Bill Champlin, Herbie Hancock, Lee Ritenour and Dwayne Ford that had Porcaro working with Foster. Ford’s track in particular is entitled “Lovin’ And Losin’ You.” That song wasn’t a hit in any form but absolutely deserves to be part of the track list with its magnificent, jazzy groove that’s a must listen. “Lovin’ And Losin’ You” is one of those songs that exemplifies the L.A. top quality pop sound of the early eighties and Jeff Porcaro was such an important part of that unforgettable music era. We have asked David Foster to write a few words to remember his friend and this is what he said: “Jeff was a one of a kind musician. There never was, nor there will ever be another one like him. He had the best feel, the best personality and the best musicality of any musician I have ever met. I miss him a lot and still think about him all the time. All of us who were in his circle still talk about him all the time. He was the best of the best!” 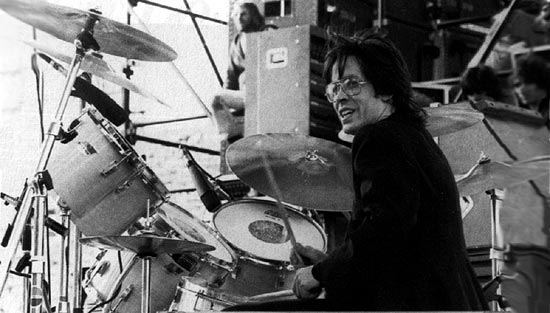