from THE CAPTAIN’S JOURNEY

After the massive crossover success of his 1977 album “Captain Fingers,” guitar virtuoso Lee Ritenour came back one year later with another delicious record entitled “The Captain’s Journey.”Again, the music style was a refined jazz/fusion with catchy arrangements beautifully performed by the leader supported by the usual list of big studio names. “Captain’s Journey” is mostly an instrumental affair with standout tracks like “Matchmakers” and “Sugar Loaf Express” that sport strong hooks and tight, superior soloing by Ritenour. There are also a couple of vocal moments on the album, one sung by Patti Austin and one performed by Bill Champlin who already sang a fantastic cover of Stevie Wonder’s “Isn’t She Lovely” on “Captain Fingers.” Austin delivers a strong cover of her own composition, “That’s Enough For Me,” co-written with Grusin for her “Havana Candy” album while Champlin added new lyrics to the Ritenour instrumental “Morning Glory.” Champlin is at the top of his game here, his vocals ooze soul and  he shines vocally. David Foster wrote the catchy instrumental arrangement and played keyboards with Grusin while the rhythm section is lead by the legendary Steve Gadd and Abraham Laboriel with Jay Graydon on rhythm guitar.
In 2005, Ritenour covered this track on his cd/dvd entitled “Overtime” with the amazing Kenya Hathaway singing Champlin’s part. 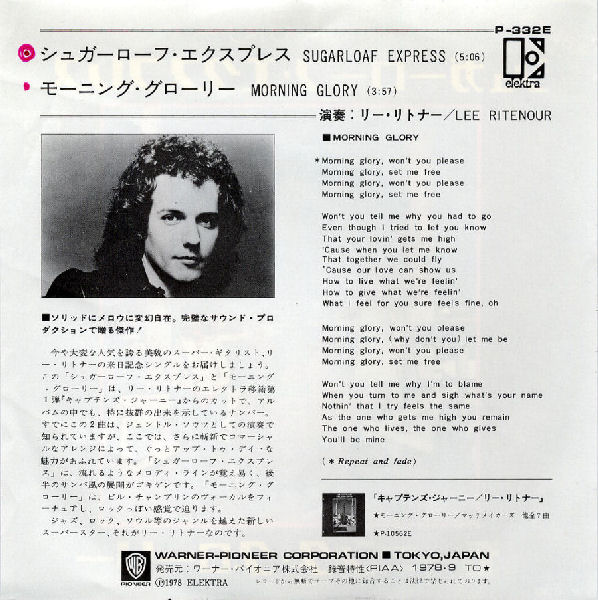