“Greatest Hits 1982-1989” is the perfect tool for those music lovers who appreciate Chicago’s Adult Contemporary/Pop hits of the eighties. Released at the end of the decade, “Greatest Hits 1982-1989” presents all the evergreens of Chicago’s collaboration with David Foster like “Hard Habit To Break,” “Stay The Night,” “Hard To Say I’m Sorry” and “You’re The Inspiration.”

Those perfectly crafted ballads shaped the now-classic Adult Contemporary sound of the era created from inspired vocal performances, superior musicianship, great arrangements and hi-tech production. The band kept having hit singles with Foster even after Peter Cetera’s departure in 1985 with the gorgeous “Will You Still Love Me” and “ If She Would Have Been Faithful,” both from Chicago 18.

“If She Would Have Been Faithful,” co-written by Steve Kipner and Randy Goodrum, was a smash Adult Contemporary hit and reached #17 on Billboard’s Hot 100. It’s a perfect example of Foster’s arranging genius and showcases the band’s fantastic vocal harmonies by Jason Scheff and Bill Champlin. “Greatest Hits 1982-1989” also includes the band’s big Chicago 19’s hits written by Diane Warren like “I Don’t Wanna Live Without Your Love” and “Look Away” that reached #1 on the charts in 1988. This album arrived quickly in the Top 40 and has sold more than six million copies in the US to date. 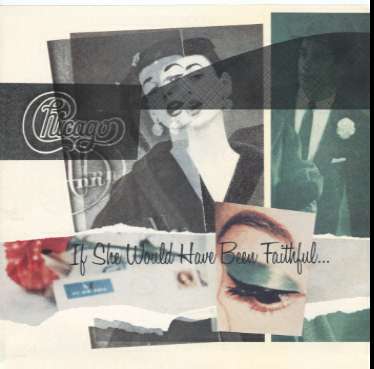 I was thinking about her
Visiting the past
Reconstructing details
With old photographs
I was studying the faces
With that objective point of view
Suddenly, rememb’ring doesn’t haunt me

At the time, you couldn’t tell me
If one day I’d be glad
That something that I thought was love
Was misinterpreted
She had another lover
She emphatic’lly denied
But they were doing me a favor
A blessing in disguise

I watch you sleeping
Your body touching me
There’s no doubt about it
This is where I want to be
You know, it’s so ironic
I had to lose to win
I want to thank her
Thank her for leavin’

(Bridge:)
It’s a paradox
Full of contradictions
How I got from there to here
It defies all logical explanation