Skylark was a pop/rock group originally from Canada’s British Columbia. In the early seventies they got a record deal with Capitol Records and moved to California to work on their debut album.

Members of the band included guitar player Doug Edwards, bassist Steve Pugsley, David Foster on various keyboards plus two talented singers, B. J. Cook, who was Foster’s then-wife, and Donny Gerrard. Their self-titled record was released in 1972 and one of its three singles, a wonderful ballad entitled “Wildflower,” skyrocketed to the top of the charts in both Canada and the US . It went to #1 in their homeland while it reached the top ten on Billboard’s Hot 100 and was also a top 5 Adult Contemporary hit. “Wildflower” was co-written by band member Edwards with Dave Richardson, a policeman friend from Victoria. Through the years, “Wildflower” has been covered by a multitude of singers like Johnny Mathis, The O’Jays, Color Me Badd and Blake Shelton under Foster’s production.

“Skylark” is a nice collection of songs that touches many genres from the bluesy opener, “Brother Eddie” to the breezy up-tempo “What Would I Do Without You” that was the first single off the album. Both songs feature Gerrard’s and Cook’s powerful, intense voices. Cook’s vocals reminds the listener of Bonnie Raitt in style and delivery. There are also moments that echo The Carpenters’ hits of those years like the evocative, “I’ll Have To Go Away.” “The Writing’s On The Wall” is a solid R&B number while “Twenty-Six Years,” co-written by Foster and Gerrard with Linda Patterson, is an interesting pop/rock number with very good guitar and keyboard solos. Listening to the album, Foster’s talent as arranger and keyboardist is pretty evident. The orchestral instrumental “Suites For My Lady” and the progressive sounds of “Virgin Green” mark Foster’s exceptional talent. “Virgin Green” was originally a single’s b-side and was included in the CD reissue of “Skylark” as a bonus track.

Skylark will record another good album entitled “2” in 1974 before going their separate ways. Although it was the end of the band, it marked the beginning of the legendary career of David Foster as a music maker. 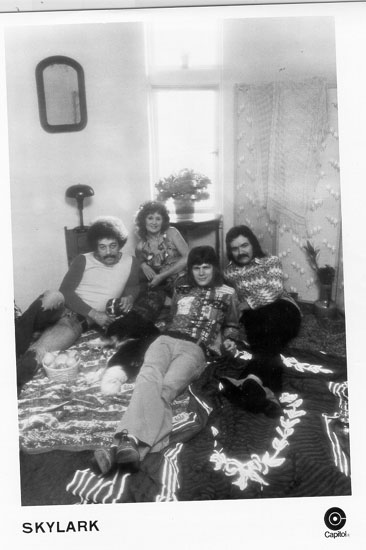 I Thought that I had it all worked out
Really thought I knew what life was about
That’s just like me, not a question, not a doubt
How could I have been so wrong so long

Parts of a song, that’s what I thought of changes
Isn’t it funny how life rearranges
Now I’ve become what I once thought was strange
And though I know it’s a better way to be
There is still lots of changes left in me

Twenty-six years on a roundtrip ticket around the sun
I’ve been that many times
I took the journey, tried to find my heaven
‘Cause last time out, I got left behind