from LOVING IS LIVING

The McCrarys were a family group from Los Angeles who developed a fresh, gospel infused R&B style on a few solid releases between the late seventies and the early eighties. Their 1978 debut album for Portrait records was entitled, “Loving Is Living.”
Alfred, Linda, Charity and Sam together with their brother Howard were also very active in the session scene singing on several albums by people like Cat Stevens, Melissa Manchester, Chaka Khan, Andrae Crouch and Yolanda Adams. On “Loving Is Living,” produced by veteran saxophone player and producer, Trevor Lawrence, they were joined by an impressive cast of session cats like Chuck Rainey, James Jamerson, James Gadson, Mike Baird and the two whiz kids, Jay Graydon and David Foster. The Airplay guys added their classy touch playing refined keyboards and guitars on several cuts. Stevie Wonder also made a special appearance on “Loving Is Living” playing harmonica on the track, “You” that also featured Foster on piano. That mid-tempo, feelin’ good song was also released as a single while the album reached #32 on the R&B chart. Among the other highlights on “Loving Is Living” are the up-tempo and other single, “Don’t Wear Yourself Out,” again with Foster on keyboards and synths, the inspirational title track and the classy gospel sounds of “Here’s That Feeling” that clearly benefits from Foster’s elegant keys and Graydon’s fantastic guitar solo. On this song and throughout the whole record the McCrary’s vocal performances are top notch with great leads and flawless harmonies. The siblings also co-wrote all the songs on the album. 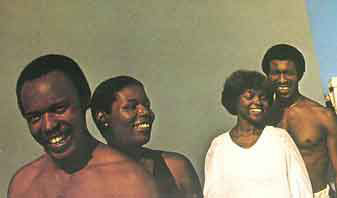