Peter Cincotti’s 2007 album, “East Of Angel Town,” was produced by David Foster, Humberto Gatica and Jochem van der Saag. With the help of Foster’s dream team, the talented, young singer/songwriter/piano player made the transition from being the next Harry Connick, Jr. to an updated version of the best Billy Joel of the seventies.His music changed from a jazz/traditional pop setting to a modern pop with irresistible jazzy flavors. “East Of Angel Town” was a kaleidoscope of refined, original pop songs with smart lyrics, top notch performances and brilliant arrangements. Foster left Cincotti the right space to express his talent and the result is nothing short of impressive.

“East Of Angel Town” was anticipated by the release of “Goodbye Philadelphia,” an emotional ballad with a bittersweet atmosphere. Cincotti’s vocal performance is really noteworthy, showcasing his falsetto on the catchy refrain. Not only are there hints of Bill Joel’s brilliance, “Goodbye Philadelphia” has flavors of Elton John and even Tears For Fears all fused into Cincotti’s superior personality. The song was also part of an EP that included two gems from the album; “Angel Town” with its rock/jazz overtones and the magnificent ballad “Cinderella Beautiful” that wouldn’t have sounded out of place on Joel’s milestone record, “The Stranger.” The single was well received in Europe with good radio airplay like the whole “East Of Angel Town” album.

The biggest problem with “East Of Angel Town” was Cincotti’s label, Warner Music Group, postponed the USA release for over a year and that took away a lot of its potential. Our opinion is that the album was probably too refined and adventurous for the flat music world currently popular. It was made of great songs, musically and lyrically, not just fancy clothes and a weak refrain that’s what’s typically seen on MTV today. Cincotti’s album wasn’t pop, wasn’t jazz and it struggled like the vast majority of those who walk the fine line between the two genres. This is music that rarely gets played on radio and doesn’t sell big numbers unless your name is Steely Dan, but it’s the kind of music we love and will always support! 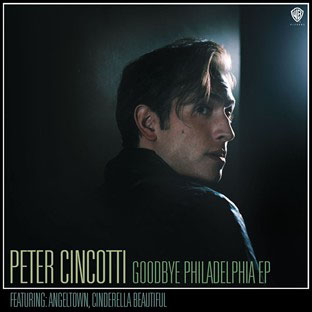 Remember, Philadelphia
When the world was young and warm
So in love and living for
Everything new

But I know, Philadelphia
The winter wind will slowly take
Your heart and soul until it makes
Nothing of you

Here on seventh avenue
I tip my old top hat to you
I hope you find somebody who
Will love you like i do
’cause i would lay your body down and rock your tears away
But it’s much too late for now to be like yesterday
And the time is running out and we still have to say
Goodbye
Goodbye
Goodbye
Goodbye, Philadelphia