Recently, Paul Anka’s album “Walk A Fine Line” came back into the spotlight. The newly-released Michael Jackson single, “This Is It,” was originally co-written by the two superstars to be included as a duet on this 1983 Anka project.

It didn’t make the album and just resurfaced last month, sung solo by Jacko, as the first new song from the late king of pop’s vaults. As this anecdote tells, “Walk A Fine Line” was obviously conceived as a major comeback for the Canadian singer with a deluxe production by Denny Diante and the best names in quality pop like David Foster, Jay Graydon and Michael McDonald of Doobie Brothers fame to co-write and arrange the material. “Walk A Fine Line” is chock full of great songs including “Hold Me ‘til The Mornin’ Comes,” co-written by Anka and Foster. This wonderful ballad includes special guest Peter Cetera on backing vocals and has the distinction to be the last Top 40 hit of Anka’s career. It was also a big Adult Contemporary hit. McDonald and Foster also helped Anka out on the follow up single, “Second Chance.” It’s a feel good, up-tempo number wonderfully arranged by Foster and Graydon that went to #12 on the Adult Contemporary chart. McDonald also co-wrote with the singer the Steely Dan influenced title track which was the b-side of the “Second Chance” single. McDonald had a hand in the slick, classy ballad entitled “No Way Out” that was heard on the soundtrack of Kevin Costner’s hit movie of the same title. Foster co-wrote and arranged many other songs for “Walk A Fine Line,” the best being the up-tempo goodie “Take Me In Your Arms” with Richard Page and Steve George of Pages on backing vocals and “Darlin’, Darlin’” with harmony vocals by special guest Kenny Loggins. 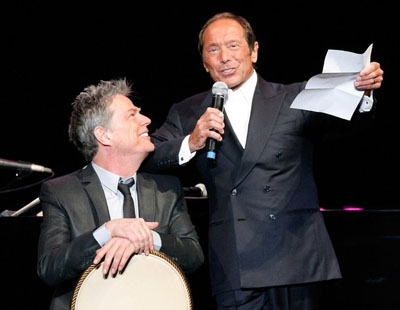