In 1986, Billboard magazine honored David Foster with a special tribute. Among those who praised his work and talent were Burt Bacharach and Carole Bayer Sager who wrote him this dedication: “Dear David, “That’s What Friends Are For” could have been written for you and about you. You’re the greatest, love.” Bacharach and Bayer Sager were thankful to Foster for adding his golden touch through the years on many of their most successful productions. Foster played keyboards on worldwide hits including “On My Own” by Patti Labelle and Michael McDonald plus “That’s What Friends Are For” by Dionne Warwick with Elton John, Stevie Wonder and Gladys Knight. Foster’s trademark magic on the acoustic piano was also heard on “Heartlight,” another great collaboration between Bacharach and Bayer Sager. Released in 1982 by Neil Diamond, this beautiful ballad was a Top 5 Hot 100 hit and a #1 Adult Contemporary hit. The veteran superstar carries the gorgeous melody with an intense crescendo that leads to the powerful refrain. “Heartlight” was also the title track of Diamond’s album released that same year. The singer with Bacharach and Bayer Sager composed the bulk of the certified platinum album, tailoring it for the adult audiences of that era. Foster and Diamond also co-wrote “I’m Alive,” an up-tempo ditty that was another Top 40 entry and Top 5 Adult Contemporary hit at the beginning of 1983. 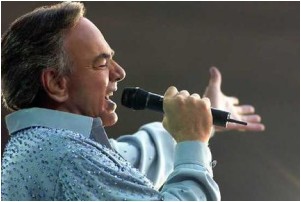