From THE BROADWAY ALBUM
Written by Leonard Bernstein & Stephen Sondheim

“The Broadway Album” was a milestone of Barbra Streisand’s unique career. Released in 1985, this perfect collection of Broadway classics became a huge hit, reaching the top of the charts and staying there for three weeks. It sold over four million copies and gave Ms. Streisand a well-deserved Grammy for “Best Female Vocal Performance.” The superstar was in rare form here. Her voice is pure and clear, exploding with power and intensity on numbers like the opening “Putting It Together,” yet very emotional and tender on the gorgeous “If I Loved You.”
David Foster performed on many of Streisand’s most successful records in the seventies. Being the hottest up and coming name in record production, he was asked to produce this album. The singer had a vision; she wanted to sing “Somewhere” from “West Side Story” and have her vocals sound like they came from another space. Foster perfectly realized her idea and the result was amazing. “Somewhere” is an incredible work of art. Foster’s pristine production plus his inventive use of synthesizers and keyboards helped the singer create what has become a trademark song of her career. She soars high and delivers the hopeful lyrics with an amazing vocal performance that gives the album a glorious finale. Foster’s stunning work was also awarded with a Grammy for “Best Instrumental Arrangement Accompanying Vocal.” The song was a Top 5 Adult Contemporary hit and reached the Top 40 on Billboard’s Hot 100 chart.
Another standard recorded by Foster and Streisand during these same sessions was “I Know Him So Well” from “Chess.” Although a very good performance, it was a bit too pop compared to the rest of the album. “I Know Him So Well” benefits from a great arrangement by Mr. Foster, plus a vocal cameo by Richard Page who gently duets with the superstar. 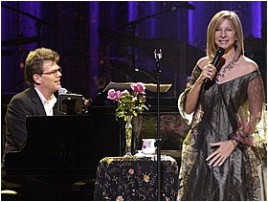