LOVE ALL THE HURT AWAY

From LOVE ALL THE HURT AWAY
Written by Sam Dees

“Love All The Hurt Away,” released in 1981, was Aretha Franklin’s second project for Arista. It marked another collaboration with L.A. session kings like David Foster, Robbie Buchanan, Greg Phillinganes and the guys of Toto under Arif Mardin’s brilliant production. After the good success one year earlier of the “Aretha” album, this new offering went even further in setting the Queen Of Soul’s spectacular voice into the refined moods of the new masters of pop. This record is along the lines of those Quincy Jones’ productions of the same era like George Benson’s “Give Me The Night.” Benson himself is a special guest singing the sweet title track with Franklin. The vocal interplay between the two is super fine with their distinctive voices blending beautifully, trading emotional lines and jazzy scats. David Foster added the golden touch with his sublime performance on the electric piano and the tasteful use of synthesizers. The rest of the spectacular rhythm section included Jeff Porcaro on drums, Louis Johnson on bass, Buzzy Feiten on guitar, plus a smooth sax solo played by Eddie Daniels. Both this song and its parent album became top ten hits on the r&b charts and entered the pop charts as well.
There are other fine songs on this collection including the cover of Sam & Dave’s “Hold On I’m Comin'” that brought Franklin another Grammy Award. The danceable “Living In The Streets,” was written by hitmaker Rod Temperton and includes Foster on electric piano. Finally, let’s mention a couple of solid ballads; “Truth And Honesty” co-written by Burt Bacharach, Carole Bayer Sager and Peter Allen and the intense “There’s A Star For Everyone” by David Lasley, Don Yowell and Allee Willis. All these songs are stamp by Franklin’s unique voice for impressive results. 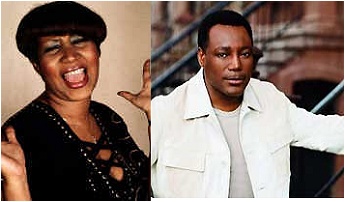