DON’T ASK THE REASON WHY

“Don’t Ask The Reason Why” by Restless Heart was included on the soundtrack for the hit movie “The Secret Of My Success” starring Michael J. Fox and Helen Slater. Released in 1987, this collection was David Foster’s new work for a major movie after the incredible triumph of “St. Elmo’s Fire.” Like its predecessor, “The Secret Of My Success” includes well-crafted, tender instrumentals all written by the Canadian genius including the enchanting love theme “Water Fountain.” These tunes are mixed with a few mainstream pop/rock songs sung by big names like Night Ranger on the up-tempo title track, Roger Daltrey of The Who, Bananarama and Pat Benatar. We think the best song of the bunch is “Don’t Ask The Reason Why.”
It is a sweet ballad with a strong country/pop feel to it. David Foster’s production beautifully balances Restless Heart’s country overtones with the best AC/pop style of the era. Another positive factor are the group’s strong vocal harmonies that soar high on a musical palette consisting of keyboards, synths, acoustic and electric guitars. In our opinion, this ballad had “hit” written all over it, but was never released as a single. It would have probably performed better than the Night Ranger track that only reached # 12 on the Modern Rock chart and # 64 on the Hot 100. 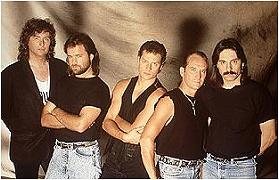 Alone, on your own
No way to see the end
But here’s where the road begins
In time, I know you’ll find
Whatever you’re searching for
All of your dreams and more

You’ve known, all along
It won’t be an easy climb
But nothing can change your mind

And now, here you stand
Your destiny’s calling you
You know what you’ve got to do…..

Don’t ask the reason why.