Bebe & Cece Winans are two of the most impressive figures in the ultra-talented and extended Winans family. Their relatives also include gospel superstars, the Winans, their four brothers, plus several others members all active in the gospel music world. Bebe (Benjamin) and Cece (Priscilla) debuted in 1985 with “Lord Lift Us Up” and have published half a dozen albums to date. They finally reached platinum status, in 1991, with their album, “Different Lifestyles.” This “crossover” record brought them several hit singles on the r&b charts and a Grammy for Best Contemporary Gospel Album. A couple of years later, they first worked with David Foster appearing on the super-producer’s Christmas release singing a stunning version of “The First Noel.” This amazing rendition was eventually included in their own soulful Christmas record entitled, “First Christmas.” Finally, in 1994, “Relationships” was released and saw the duo working again with David Foster. “Don’t Let Me Walk This Road Alone” is a sweet ballad co-written by Foster with Keith Thomas (who produced all their previous albums) plus inspirational lyrics written by Linda Thompson. Here brother and sister beautifully trade lines while giving two very emotional and powerful vocal performances. As per usual, Foster provides his usual, perfect arrangement and grand production. The lush strings, his piano and some guitar licks gently underline the two singers’ heartfelt performances. “Relationships” is another well prepared mix of pop/gospel stuff with some mild funk thrown in. It includes another Foster production, a good ballad written by Bebe and entitled “These What Abouts” plus other nice songs produced by, among others, Arif Mardin, Rhett Lawrence and Cedric Caldwell. “Don’t Let Me Walk This Road Alone” was also covered by Melissa Manchester, in 1995, on her record, “If My Heart Had Wings.” 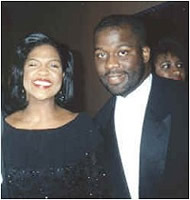 Help me now as I start to fall
Shelter me, I don’t ask for much at all
All I need is just one more day
Giving me hope to dream upon
Don’t let me walk this road alone