READ BETWEEN THE LINES

Tim Feehan and David Foster started working together around 1983/84 when Feehan, a fellow Canadian, won the Alberta Recording Association songwriting competition. The prize was a recording session with Foster. They went into the studio and recorded, “Read Between The Lines,” a pop/rock, up-tempo song clearly influenced by the classier stuff on Foster’s productions for The Tubes, and Chicago or Toto’s earlier records. Toto’s guitar maestro, Steve Lukather, appeared on the sessions together with The Tubes’ lead vocalist, Fee Waybill. The song is really catchy and radio friendly. Feehan’s strong vocals complemented Lukather’s guitar and Foster’s polished, keyboard driven arrangement. The song was released as a single in 1985 and in 1987 was finally included on Feehan’s self-titled album. Another song from the album, “Where’s The Fire,” was used in the movie “The Wraith.” That same year Feehan took part in a tour that Foster organized in the Far East. The super-producer shared the bill with Lee Ritenour. There Feehan, together with Phil Perry and a fabulous band, performed classics like “After The Love Is Gone,” “Mornin,” and “St. Elmo’s Fire.”
Feehan’s career started as part of the pop band Footloose that released one self-titled record in 1980. Let’s not forget that the singer also released a couple of good albums in the early eighties entitled “Carmalita” and “Sneak Preview.” Both were good efforts with nice songs in the sophisticated pop vein. His most recent works, “Full Contact,” “Pray For Rain,” and “Tracks I Forgot About,” lean more toward hard rock. Even though the songwriting is solid, these later efforts aren’t as interesting as his earlier works. 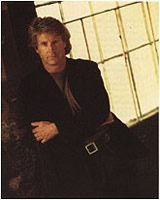