IF THIS TIME IS THE LAST TIME

From FROM Q WITH LOVE
Written by David Foster, Diane Warren & Linda Thompson

“From Q With Love” is a collection of Quincy Jones’ best ballads. Released in 1999, it includes music he produced for Michael Jackson, George Benson and Aretha Franklin, plus the sweetest moments from his own solo albums. He also produced four new songs for this project. “If This Time Is The Last Time,” co-written by David Foster with his wife Linda Thompson and good friend Diane Warren, is the best of the new tunes. It is the only one that can compare to the evergreens included in this collection. These gems include “Baby, Come To Me” and “Just Once,” both featuring Foster on the keyboards, plus “Human Nature,” and “The Lady In My Life.” “If This Time Is The Last Time” is a very elegant number, beautifully arranged and played by Foster with the usual partners in crime like Jerry Hey, who was also the associate producer, Greg Phillinganes, Paul Jackson, Neil Stubenhaus, John Robinson and Kirk Whalum, who plays his tender sax licks throughout the song. “If This Time Is The Last Time” is a winner for many reasons, especially the emotional vocal performance given by Patti Austin. The veteran singer reunites with her mentor, Jones, and her voice absolutely shines as she sings the bittersweet words. Foster and Jones have been working together for almost thirty years and their collaborations have always represented some of the best examples of quality in pop music. This song is no exception. Take a listen. 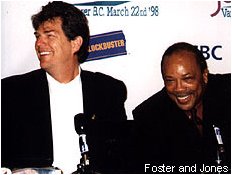 some other day, some other time
when you speak my name will you be kind
I hold on to your memory
coz you´ll always be a part of me