I FINALLY FOUND SOMEONE

“I Finally Found Someone” is just one episode in the long professional partnership between Ms. Steisand and David Foster. The seventies found the super-producer first playing keyboards and arranging music on her records like “Lazy Afternoon,” “Superman,” “Songbird,” and “Wet.” In 1985, Foster produced the hit song “Somewhere” from her #1 “Broadway Album,” bringing him back to the Grammy podium for his inspired arrangement of the song. Many other productions followed including the 1993 #1 record, “Back To Broadway,” to this beautiful ballad co-written by Streisand and legendary composer Marvin Hamlisch (“The Way We Were”), pop/rock producer/songwriter John “Mutt” Lange (Shania Twain, AC/DC, Def Leppard), and Bryan Adams, another old friend of Foster’s who duets with Barbra. The Canadian superstar does a magnificent job matching Streisand’s voice with his gritty vocals and the result is smooth as silk. Foster arranged the song with help from co-writers Adams and Lange. The arrangement is classic enough for the faithful Streisand fans, but Adams’ voice and the catchy refrain give the song a contemporary twist perfect for A.C./pop radio. This soundtrack includes another track produced by Foster, “All Of My Life,” that’s good but not as interesting. Another Foster song, his beautiful rendition of “Carol Of The Bells,” was actually used in the movie but does not appear on the soundtrack. 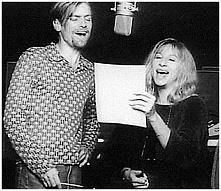 This time it’s different,
It’s all because of you
It’s better than it’s ever been
Cause we can talk it through

Did I keep u waiting? (I didnt mind)
I apologize (baby that’s fine)
I will wait forever
Just to know you were mine
(Ooh) You know I love your hair
( Sure it looks right?)
I love what you wear
(Isn’t it too tight?)
You’re exceptional
I can’t wait for the rest of my life