A LOVE OF YOUR OWN

Ned Doheny is a gifted singer/songwriter. In the second half of the seventies he developed a unique sound that mixed the acoustic melodies of Jackson Browne and James Taylor with the black rhythms of labels like Motown and Stax. “Hard Candy,” released in 1976, was his second album and his first collaboration with Steve Cropper. The famous guitarist for Booker T. and the MG’s, Cropper also co-wrote hits like “Knock On Wood,” “(Sittin’ On The) Dock Of The Bay,” and “In The Midnight Hour.” Cropper’s influence is an important factor on “Hard Candy,” especially the album’s funkier moments. The result is a sophisticated record that is an absolute pleasure to listen from start to finish. Doheny’s fine efforts are helped by the wonderful musicianship of Victor Feldman and John Guerin of the L.A. Express, Tom Scott, the Tower Of Power Horns and the incredible skills of a young David Foster. Foster plays on all but one of the tracks and accompanies Doheny’s pleasing voice with his masterful keyboards. Other great moments are the soul/funky opener, “Get It Up For Love,” and “Sing To Me.” Among the special guests on the album are Hamish Stuart, lead singer of Average White Band who sings on his own song, Linda Ronstadt, J.D. Souther, plus Don Henley and Glen Frey of the Eagles.
“A Love Of Your Own,” a rarefied, intense ballad, is probably the most famous song on “Hard Candy.” It was a big hit for the Average White Band around that same time. This first co-writing effort between Doheny and Stuart started a relationship that created many other special songs for AWB and others like Chaka Khan, George Benson and Ben E. King.
A couple of years later, Ned Doheny released another great album, “Prone,” with Cropper as producer and Foster as main keyboardist. This album is another winner for listeners who appreciate quality music. 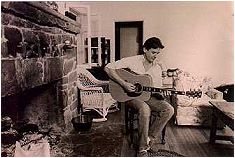