From LILAS
Written by Djavan

Djavan is a true legend in the brazilian’s music world of the past 25 years. Through the years several of Djavan’s compositions have crossed the borders of his native country to become universal classics, sung by people like Manhattan Transfer, Dionne Warwick and Kevyn Lettau. Together with Ivan Lins, he is the brazilian singer/songwriter that has appealed the most to north american producers, musicians and audiences, especially for the strong jazz flavors of his music. During the eighties he recorded a few project in the USA, with guests like Stevie Wonder, Michael Franks and George Duke. “Lilàs” was one of them, released in 1984 with David Foster and many other great musicians adding their unmistakeble touch to Djavan’s music. This album echoes some of Jarreau’s finest stuff of those years, mixing Djavan’s south american roots with the classiest R&B and quality pop.
It’s hard to pick just one song out of the album, cause “Lilàs” is a wonder from start to finish, with its gorgeous ballads, “Esquinas” and “Libertade”, up-tempos like “Infinito” and “Transe” and more traditional brazilian stuff like “Obi” and “Canto Da Lira”. “Iris” is our choice and from its intro all built on synths and keyboards, the Foster fan really feels home.
The track is quality pop at its best, an up-tempo song that finds Foster and the other cats (John Robinson, Nathan East, Mike Landau and Ernie Watts at the sax solo) groovin’ behind Djavan’s vocals and scats. Foster arranged the tune with help by Erich Bulling for the string arrangement and you can just envision the song sung by EWF or Boz Scaggs, it is classic Foster. We suggest you to look for this cd and also check out the rest of Djavan’s work. He truly is a gifted musician and he still makes great records today with beautiful melodies and sophisticated rhythms. 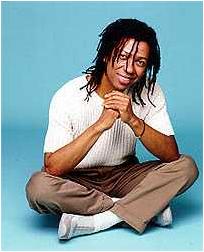