Yukiko Ito is a Japanese singer/actress who recorded her debut CD in LA, in 1990, working with A-list producers like Phil Ramone, Dennis Lambert, Brooks Arthur and David Foster. The record is truly enjoyable, a collection of pop songs written by, among others, Glen Ballard, Barry Manilow, Richard Marx and Paul Anka who also produced three songs including a beautiful version of his classic, “Put Your Head On My Shoulder”, as a duet between Ito and the late, ultra-talented, Warren Wiebe. Foster appears as producer of two songs, the first one, “Insincere”, is a very nice cover of a Planet 3’s ballad that Ito sings with good style, helped by the rarefied arrangement and Jeremy Lubbock’s strings.

The other song is “Could’ve Fooled Me” and it is our song of the week. It is another pop ballad, this time around written and arranged by Foster with Dennis Lambert. The song is a bittersweet ditty that Ito delivers quite nicely underlined by Foster’s masterful keyboard playing and with the final touch of Dave Boruff’s tender saxophone solo.

It remains to be said that among the other musicians and singers appearing on the cd there are John Robinson, Mike Landau, David Spinozza, Neil Stubenhaus, Carlos Alomar, Jeff Lorber and Bill Champlin who contribuites with his vocals to the beautiful “Say It”. 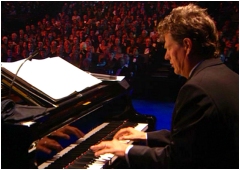 Don’t ask, what am I gonna do
‘Cause it hasn’t even started sinking in
Need time, time to think it through
How am I supposed to know where I begin?
Suddenly, I’m alone here
Loving me isn’t in your plans
Yesterday you were mine
And my heart was in your hands

So sad, I’m the last to know
Would’ve bet my life we were going all the way
It’s too bad you didn’t let me go
If you were honest then, I’d be over you today
Now suddenly, I’m alone here
Loving me doesn’t feel so right
Yesterday you were mine
But we’re history tonight

There was no indication
No warning, no signs
I guess you could say that I…
I must have been blind