From RIT
Written by Eric Tagg

If someone that reads these reviews still thinks that David Foster is “only” the king of ballads, well, here’s another of the songs that can prove them absolutely wrong. Mr. Briefcase is a very good pop/rock number from Lee Ritenour’s “Rit” album that saw the light in 1981. It’s a tune that echoes Toto (no surprise that Jeff Porcaro and David Hungate drive the rhythm section) mixed with the signature sounds of Rit’s guitar (listen to the burning solo) and Foster keyboards (check out the great synth intro). The song ,as well as many others on this record, was written by an amazing singer/songwriter called Eric Tagg who also handled the lead vocals with a style and a class that are absolutely second to none. Eric is without doubt one of the best ever, sounding like a great mix of Stevie Wonder and Bobby Kimball.

The “Rit” album was quite successful and it also had a top 20 hit with “Is It You ?” cowritten by Ritenour and Tagg with Bill Champlin. A who’s who of westcoast musicians appears on the cd. If you like this record you have also to look for EricTagg’s “Dreamwalking” that has the same sounds as well as the same musicians (Foster included) and that was always released the same year. 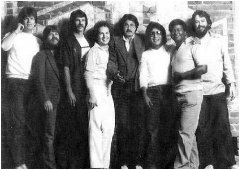 Businessman, green sedan
sold his soul to reach his goal
working his way up the ladder
success is the ends and his lies are the means

Business cards, big cigars
smiles conceal a rotten deal
money can talk and he knows it
one piece of paper can make you or break you

(If I) sign my name (must I) play the game ?
A deal’s a deal (if it’s) signed and sealed
no time to feel sorry for losers
a cat gets the mouse and the dog eats the dog – Oh

Businessman, shake my hand
tell me lies, but hide your eyes
hand on real tight to your briefcase
if you should lose it, you’ll have
to stand naked like me