From ALONG THE RED LEDGE
Written by Sara Allen & Daryl Hall

“Along The Red Ledge” was released in 1978 and it was Foster’s first collaboration with pop/R&B duo Hall & Oates, a match that will last for another album (“X-Static”) and will have some nice hit singles like “It’s A Laugh” and “Wait For Me”. “August Day” arrives at the end of the record and it is such a welcome surprise. It’s a magical song that can really touch the listener deep inside. Hall’s vocals sound melancholy like the moving harmonica solo while Foster’s effective carpet of keyboards underlines the tune.

This was one of Foster’s first big productions and it sounds fresh and interesting today after 24 years from its original release. Many big names appear on it like George Harrison, Robert Fripp and Todd Rundgren. While this album sounds like a mix of pop and r&b with some hard rock moments, “X-Static” sounds a bit more disco/pop, but they are both interesting examples of Foster’s developing production style of that era. 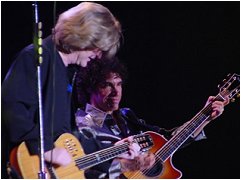 I saw the sun, though it didn’t shine
Gave up no shadows, gave out no way to know the time
No wind to blow the silver leaves
The drone of clever talk just stopped
The air hangs out, hesitates to carry a thought
Away from me
And the sky colored heavy gray
August Day