Produced by the legendary Steve Cropper of Booker T. & The MG’s fame, their self-titled effort is a delicious blend of rock and soul with a jazzy flavor. Cropper also played guitar on the album and brought along Donald “Duck” Dunn, Timothy B. Schmit, Helm, Nigel Olsson and session aces like Ed Greene, Bob Glaub, Leland Sklar and up’n’coming David Foster.

Foster played on six tracks of “The Cate Brothers” showcasing his talent on fender, organ and clavinet. He appeared on the song “Union Man” that became a huge hit single, reaching #24 on Billboard’s Hot 100. It was one of the first big hits for Foster as a session player.

“Union Man” was clearly more sophisticated than the average pop hits of those days with smart rhythm changes and superior playing like Foster’s impressive solo on clavinet. “The Cate Brothers” included other good songs like the ballad “Always Waiting” and the funky/disco “I Just Wanna Sing.”

The good success of this record lead to the 1976 release of The Cate Brothers sophomore album, “In One Eye And Out The Other.” It was again produced by Cropper and presented the same mix of pop/rock and soul with jazzy playing. Foster again was on board playing keyboards on several tracks. Recently, both these fine albums were reissued on CD by the Wounded Bird label. 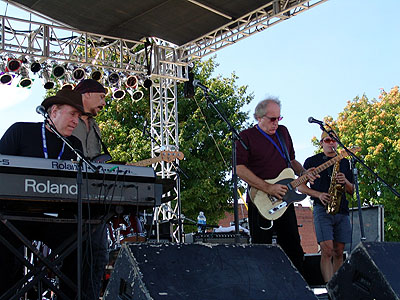 Well, it’s six a.m.
I’m out on the job
Working like a fool
For my pay

Hey, hey, Mr. union man
How am I gonna pay my dues
Or the landlord or the doctor
How am I getting new shoes

Well, I know I need
To help to get that raise
There’s one thing I don’t like

Hey, hey, Mr. union man
How am I gonna pay my dues
Owe more money than I can pay
Looks like I’m bound to lose

Well, I don’t see how
I’m going to get ahead
Seem like there ain’t no way

Well, said don’t worry
Cause I understand
Won’t you try to
See things my way

Hey, hey, Mr. union man
So glad that you understand