Eric Benet’s 2005 Hurricane cd was a very personal and interesting project. Hurricane  saw the R&B singer/songwriter moving away from the contemporary neo-soul sounds of his previous works in favor of a sophisticated musical landscape influenced by icons of the ’70s like Kenny Loggins, Bill Withers and Christopher Cross. On Hurricane, Benet delivered bittersweet love themes with deep, introspective lyrics, especially on the five tracks helmed by David Foster and Humberto Gatica. One of these tunes was “Man Enough To Cry.” 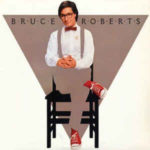 A veteran singer/songwriter, Bruce Roberts has co-written great stuff for a slew of big names including Barbra Streisand, the late Donna Summer (1948 to 2012) and Dusty Springfield (1939-1999), Cher, Bette Midler and Dolly Parton. Mr. Roberts’ self-titled debut album was released in 1977 on Elektra/Asylum Records.