from IT’S A LAUGH/SERIOUS MUSIC (single)

In 1978 Hall & Oates released their new album “Along The Red Ledge.” The production duties were given to David Foster who, around that time, was making the transition from top session player to songwriter/producer. Foster added a more polished sound to the duo’s typical Rock’N’Soul style. The album’s most refined and melodic moments are the seeds that will develop in full bloom a few years later on successful albums like “Voices” and “Private Eyes.”

“Along The Red Ledge” reached #27 on Billboard’s top 200, was certified gold and spawned a couple of good hit singles, “It’s A Laugh” and “I Don’t Wanna Lose You.”

“It’s A Laugh,” backed up by the new rock sounds of Oates’ “Serious Music,” became a top twenty hit on Billboard’s Hot 100. The tune is an enormously catchy, soft/rock  number with rich vocals by Hall and tight instrumental background with sax, guitars and keyboards clearly in the vein of future Hall & Oates hits like “Kiss On My List” and “Private Eyes.” The second single, “I Don’t Wanna Lose You,” bordered the Top Forty at #42 with its Philly inspired, up-tempo sound again sporting a great vocal by Hall. Those songs and the whole “Along The Red Ledge” album still sounds amazing today thanks to the duo’s superior songwriting talent, but also thanks to Foster’s inventive, fresh production work and help with the arrangements. 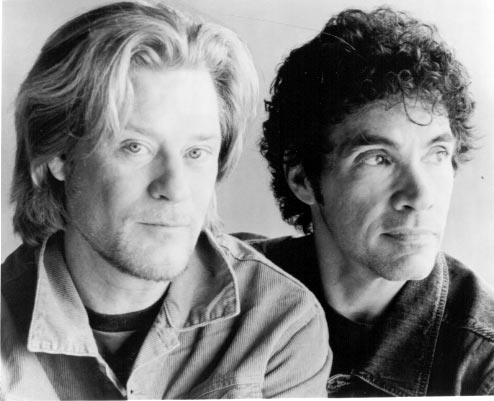 You must be thinking something
But you ain’t saying nothing
You remember me, I used to be your boyfriend
There ain’t no point in reason
It only gets defensive
And why should we ruin the
purity of the moment
It’s a Laugh

everyone thought we were
special
Maybe I should feel guilty
Is that the American way
But I just look at myself
As if I were above me
You must be thinking something
But you ain’t saying nothing
You remember me, I have been here always
I am here forever