From …TOO
Written by David Foster & Carole Bayer Sager

“David Foster’s been in my life since 1977 or 8, I think. Really quite a long time and continues to be a great force in my life, collaboratively.” These words come from Carole Bayer Sager’s official website and testify the great friendship between these two legendary figures of the music world.

This time around we go back to that first 1978 collaboration for Bayer Sager’s second album, “…Too.” That sophomore effort, produced by Brooks Arthur, was chock full of great collaborations with amazing songwriters like the late Peter Allen, Melissa Manchester, Marvin Hamlisch, Bruce Roberts and Foster. Sure Carole Bayer Sager isn’t a great singer but she put the right emotion performing her own lyrics. Big ballads obviously make the core of the album while the two Foster co-written efforts have more of a danceable feeling that give the record a welcome twist in its overall atmosphere. “It’s The Falling In Love” has hit written all over it and was recorded later on by Michael Jackson, Dionne Warwick, Samantha Sang and Dee Dee Bridgewater. All those versions are good but we feel like Bayer Sager’s is the definitive one. Foster’s arrangement is breezy with ear candy strings and horns plus the fundamental touch of special guests Mike McDonald and Bill Champlin on the smooth backing vocals. “I Don’t Wanna Dance No More” is a refined disco fiesta that also had its share of covers by singers Gwen Owens and Jeane Manson. It does sound a bit dated today but absolutely pleasant nonetheless. Both tracks features the cream of the session aces of that era like the Toto guys and Jay Graydon with Foster’s touch on piano and keyboards. Among the various ballads included on “…Too” we want to mention “You’re Interesting” and “To Make You Smile Again” co-written respectively with Peter Allen and Melissa Manchester. 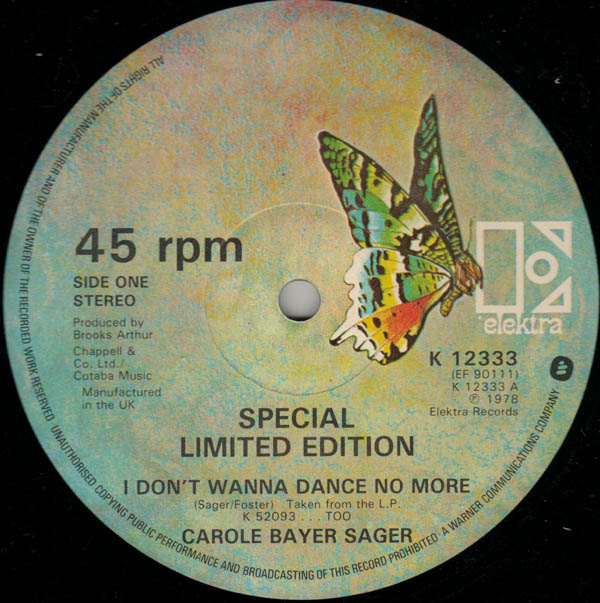