In the late seventies and early eighties, the Pointer Sisters were improving their success and crossover appeal album by album that would eventually make them one of the hottest acts in the world of pop music. Their Svengali was renowned and experienced producer Richard Perry who helped them create some very well crafted pop/R&B albums.“Black & White” was released in 1981 and went high on the charts. It was helped by the triumphant single “Slow Hand,” a top ten hit on the AC/R&B/pop charts that quickly became one of their signature songs. From the smooth pop of the opener, “Sweet Lover Man,” to the slick R&B sounds of “What A Surprise,” on to David Lasley’s sweet ballad, “Got To Find Love,” the Pointer Sisters were giving their audiences some of the best popular music for that time period.
David Foster appears on the album as co-writer and arranger of “We’re Gonna Make It,” another fine moment of this collection. The song is an up-tempo showcase for the sister’s harmonies. Foster’s percussive piano playing and synthesizers married with the frenetic vocals play a big role and give the song a different kind of new wave/pop/gospel atmosphere. Co-writer Mike Cotten, keyboardist for the Tubes, the famous band that Foster was producing during the same time, helps Foster here. Given the sophisticated sound of “Black & White,” the other musicians enlisted were obviously top session guys including Paul Jackson, John Robinson, James Newton-Howard and Nate Watts. 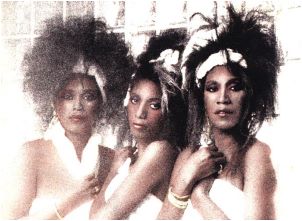