From FLOWERS IN THE DIRT
Written by Paul McCartney

Through the years, David Foster has been lucky enough to work with all the Beatles. In the early Seventies, he performed live with John Lennon. He also played on a couple of Ringo Starr’s albums. An important musical partnership was the one with George Harrison. Foster worked on Harrison’s records and was part of The Attitudes, a group that released a couple of albums on Harrison’s Dark Horse label. In the early Eighties, Foster was the most important new producer in the music industry and Paul McCartney asked the canadian producer to collaborate with him. They met in the fall of 1984 and came up with three songs – “I Love This House,” “Lindiana,” and “We Got Married.” These songs were all put on the shelf. Four years later, McCartney reworked “We Got Married” a little and included it on “Flowers In The Dirt.” The song isn’t a masterpiece, but this rock ballad has some good elements. McCartney’s vocal performance plus his bass and Mexican guitar are really good. David Gilmour (the Pink Floyd guitarist appeared on all the original 1984 sessions) adds some effective guitar solos. Guy Barker plays a nice trumpet at the end and gives the track some jazz flavor. In 1988, McCartney overdubbed Barker, Robbie McIntosh and Hamish Stuart’s performances with Neil Dorfsman. 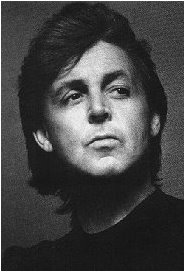 Going Fast, Coming Soon
We Made Love In The Afternoon.
Found A Flat, After That
We Got Married.

Working Hard For The Dream,
Scoring Goals For The Other Team,
Times Were Bad, We Were Glad
We Got Married.

Nowadays Every Night Flashes By
At The Speed Of Light,
Living Life, Loving Wife,
We Got Married.

It’s Not Just A Loving Machine,
It Doesn’t Work Out
If You Don’t Work At It.